Off Season at the Wynoochee Dam

Last year during our first visit to Lake Sylvia State Park I was intrigued by the large population of deciduous trees surrounding the lake. It’s always hard to tell if you’re going to get a muddy color or something that really pops, but we knew we needed to come back in the fall and see what the lake had to offer. Finding our self’s at Wynoochee Dam was the last place we expected.

And so we did. Unfortunately, I think we mistimed the change and arrived a bit too early to really get that explosion of color. The cool air combined with the calm waters gave the place that characteristic charm of fall. The leaves were indeed changing but we weren’t getting the brilliant colors I had hoped for.

Wasn’t what we had planned, but there was still plenty to explore which is exactly what we did.

To be honest, we didn’t actually find a ‘Lost City’…actually, I doubt we were the first to find these structures either. We headed off on a couple of trails we hadn’t had time to follow our last visit.

The trail snaked over hills and down into gullies as it followed the creek draining Lake Sylvia. It was on the return portion of the loop that I noticed all the brickwork near the tail. After seeing multiple patches. I released this had to be part of some lost structure which had been reclaimed by the damp forest.

Looking at the surrounding area more closely I realized I was looking at a trestle of some sort. Just as I was congratulating myself on my keen archeology skills Theresa noticed the reader board which explained this was the site of an old sawmill from the first homestead in the area. Oh well…..

Lately, dams have been getting a bad reputation and I understand the reasoning behind that. However, the boy in me still wonders when I come upon one and look at the engineering behind it. Visiting Wynoochee Dam in the offseason is just one of the moments of wonder.

The Wynoochee Dam was built by the Army Corp of Engineers in 1972 to help control floods in the area. It wasn’t until 1994 that Tacoma Power added a 30MW hydroelectric generating plant downstream from the dam. Although access to the dam has been restricted since September 11, 2001, tours are available by appointment.

We also explored the Coho Campground on the west shore of the lake. It’s a beautiful campground with 45 campsites available as well as some yurts and walk-in sites. Be warned that there didn’t appear to be any cellular service and as it’s about 30 miles north of Aberdeen you’ll want to make sure you have plenty of gas to make it back.

There were few campers when we drove through but I imagine that’s not the case in the summer season. I think we’ll be back to try it out as a base camp and explore more of the Olympic National Forest in this area.

Theresa exploring the multiple trails which are part of the Lake Slyvia State Park
A bit of color takes root on this monochrome morning at the lake.
Blue skies and fall colors over Lake Sylvia State Park.
Previous
Next 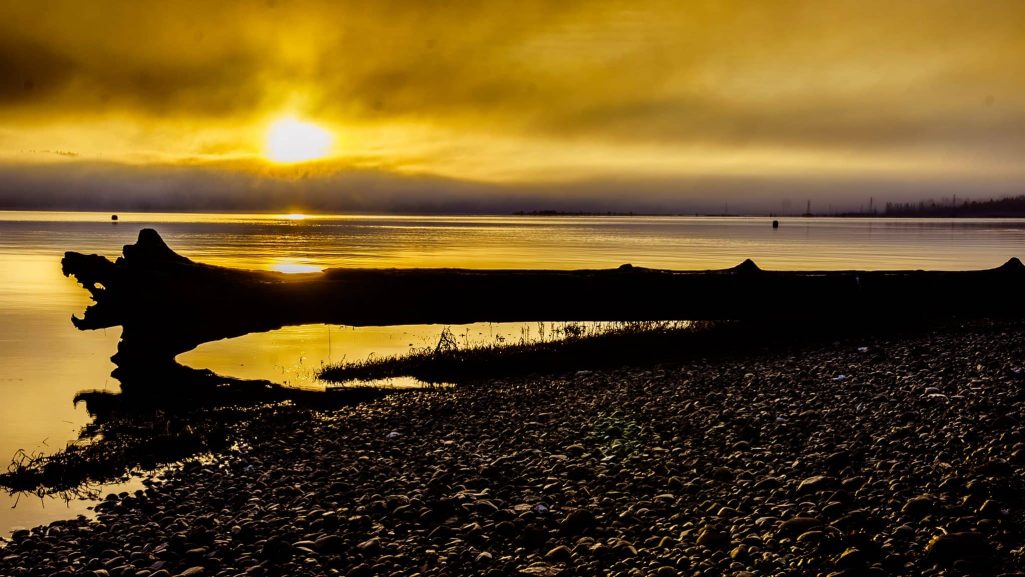 I recently wrote about a weekend trip up to Lake Cushman in the Olympic Mountains and the dam that formed the lake; see Lake Cushman

A White Christmas In Lighthouse Park

In 1888, George Grant Mackay, a Scottish civil engineer, and land developer, arrived in the young city of Vancouver in Canada. Mackay purchased 6,000 acres of dense forest on either side of Capilano River and built a cabin on the very edge of the canyon wall.

Ancient Lakes is a cluster of three small lakes nestled at the head of Potholes Coulee; a flat bottomed, cliff ringed valley.