I’m not sure which Washington State has more of, miles of coastline or waterfalls, but they are equally stunning. I often use the Northwest Waterfall Survey to gather information on any nearby waterfalls when we go out in the field. Currently, they are showing over 3100 waterfalls in Washington alone. I’m sure there are more. Likewise, my network for photography buddies will share sites they’ve stumbled on and this was the case with Walupt Creek Falls.

In this case, a good friend and outstanding photographer, Matthew White had stumbled across a photo of Walupt Creek Falls where the photographer was being secretive about its name and location. Matt took it as a personal challenge to solve the mystery. Turns out we were going to be camping that weekend just down the road so we decided to add it to the list of things to explore.

I’m not sure which Washington State has more of, miles of coastline or waterfalls, but they are equally stunning. I often use the Northwest Waterfall Survey to gather information on any nearby waterfalls when we go out in the field. Currently, they are showing over 3100 waterfalls in Washington alone. I’m sure there are more. Likewise, my network for photography buddies will share sites they’ve stumbled on and this was the case with Walupt Creek Falls.

This year it’s almost impossible to get a reservation at any of our state or national parks. However, Theresa had mentioned that she wanted to return to a site we visited a few years back in the Mt. Rainier National Park is named after the nearby river; Ohanapecosh Campgrounds. I wasn’t sure I’d be able to get us a spot and a look at the park’s online reservation system confirmed my suspicions.

However, I had heard of a service that allows you to register with and they will monitor your selected sites for cancellations allowing you to quickly snag a reservation. (Leave a comment if you’d like a link) Turns out it worked and we were a go for Ohanapecosh.

In addition to its location just in the boundaries of Mt. Rainier National Park, its best feature is the river and canyon that run through it. It’s absolutely stunning and on a hot day, you can find calm pools to cool off in crystal clear waters. Albeit cold waters. As an added bonus there’s Silver Falls which is a quick and easy hike from the campsites. It really is a win-win combination. These had been our objectives for the weekend. Matt’s discovery of Walupt Creek Falls was a bonus as it was just on the other side of Packwood.

Leaving camp early we could help but stopped at The Mountain Goat Coffee Company for a muffin and coffee as we headed toward our falls. The morning was sunny and cool as we turned off the main highway onto the washboard dirt road that leads up approximately 3000’ to the unmaintained trail that leads to falling. Turns out that was the worse part of the day as you have 20 miles to navigate this. My spine and stomach were beaten up by the time we pulled off to grab our packs and head out.

Doing what research I could before leaving the house, I really couldn’t find much in the way of descriptions concerning the trails that leads. What was out there mainly just warned how easy it would be to get lost as there is some bushwhacking to be done. Some sites mentioned that ribbons were hung as markers and that there was a bit of creek fording that was needed.

I will mention that as long as you keep the creek on your left after crossing it, you’ll eventually find a well-made trail leading down to the lower falls. Eventually, you come to a section where you’ll be looking into the canyon that houses the creek. Shortly after this, you’ll come to a fork in the trail. The left fork which doubled back on the trail looked like it must lead to an overlook as I couldn’t imagine that you could possibly make your way to the bottom of the canyon. We took the right which seem to lead to a less steep portion of the canyon. I made the work choice which result in us have to scramble some sketchy section of the canyon wall. I had brought a climbing rope and gear which is the only way we were able to make it down. We were told about the other option by others who were already at the base of the falls.

Either way you’re going to have to work for it but I imagine the left fork was a bit safer as later we crossed paths with families headed down with small children. However, it’s worth the work involved as it’s a very unusual and spectacular waterfall well worth the effort.

You will hardly break a sweat in the easy climb to a captivating 130-foot plunging waterfall. The trail was converted from an old logging road, which accounts for its easy, smooth tread. This trail makes for a wonderful and scenic family outing. 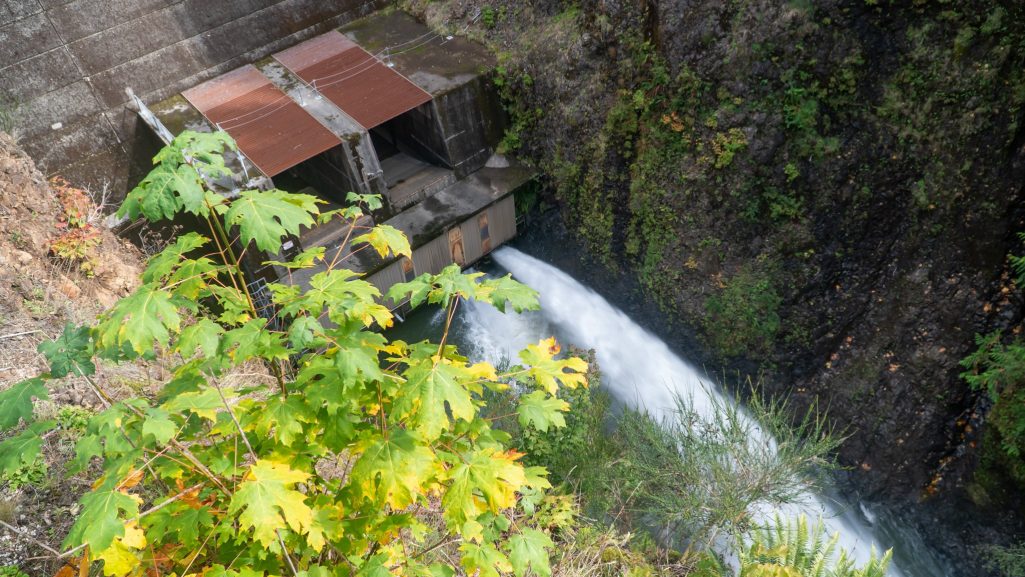 Off Season at the Wynoochee Dam

Okay, this might be a slight exaggeration when I compare the Obstruction Point drive to Bolivia’s death road, but not by much. Or at least, not in some sections where you have a drop of hundreds of feet with no room to pass an oncoming car. Just ask my passengers!

You don’t think of sea kayaking as the tool for virus busting but it may be just the perfect tool for social distance.