I wasn’t so much surprised with the functionality of the suit as I was the comfort; I own many different Kokatat pieces of outerwear and they all do an outstanding job of keeping me dry and warm.

Hi, my name is Steve, and I’m a gearhead…

Yep, no news there for those who know me but I did want to get that admission out of the way. There’s nothing I’m more guilty of than wanting to replace an old item with its newer, shinier version.

Having said that, after 20 years of paddling and 13 years of guiding,  I can say that I’ve pretty much separated the chaff from the wheat when it comes to my kit, and it takes a  lot these days to get excited about  something new.

However, during last years project in Alaska (The Secrets of Augustine for those of you that might be stopping by here the first time) there were a handful of items that truly stood out and I’d like to share my opinion with you; some of this gear was sponsored, some we purchased ourselves, but either way, I’m not going to ‘pad’ any of my reviews. If I didn’t think highly of something, I just won’t write about it.

So…the first item that I was so impressed with was our Expedition Dry Suit from Kokatat. I wasn’t so much surprised with the functionality of the suit as I was the comfort; I own many different Kokatat pieces of outerwear and they all do an outstanding job of keeping me dry and warm its just that  I’m usually ready to get out of them by the end of the day.

One feature of the suit that I genuinely liked was the hood. We more cold, wet and windy days then I care to remember, but slipping on the hood instantly made if feel as if the ambient temperature rose by 15 degrees; and again, with the felt lining I never got tired of wearing hood. I’d have to slip it off due to overheating before long before I was uncomfortable.

Another piece of Kokatat gear I came to love was the Maximus Prime PFD. I’ve been a user of the Guide PFD for so many years now that the Mango color is more a Pale Beer color, and I wasn’t so sure how I’d take to a new PFD. I have to admit that a few colorful words passed my lips the first few times I caught my nose when I’d pull it off; it’s an over the head model. But that was just a bit of a learning curve, and I loved the ease of adjustments on this model as the straps pull forward rather the backward; brilliant. And, it was incredibly comfortable no matter how long we were in the boats.

Finally, I quick word about the Maximus Prime Electronic Sling. It’s a simple add-on accessory pocket made for electronics nothing earth shattering there, but what sets this one apart is that it’s padded.  It might not make a tremendous difference on just a day paddle, but having a padded pocket for your electronics on an extended paddle can be the difference of whether the electronics actually get to see the end of the trip or not. 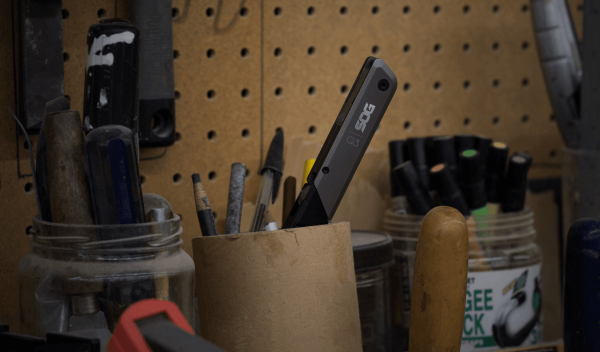 Between chores around base-camp and setting up camera gear I’m almost always in need of a small tool of some sort. Multi-tools have just the assortment of tools I most need, but honestly, I had wearing them on my belt. Then I stumbled on an intriguing alternative from SOG and there’s no going back for me.