This park sets just behind the historic Montasano township. In fact, you drive through one of their charming neighborhoods directly into the park. Once inside the park, you would never know it. You might as well be miles up the Hamma Hamma River or Hoh River for all you can see of any rural development. You can see some of the historic structures that once made up the homestead here, however.

Michael F. Luark homesteaded at this lake in 1868 and the family built a water-powered sawmill, the first in Grays Harbor County. In 1909, a dam was constructed at the end of Lake Sylvia to provide hydro-electric power and water for Montesano.

The area around Lake Sylvia State Park is rich with logging lore and history. Huge, old-growth stumps are everywhere in the park. There is a giant wooden ball carved from a single log by a local logging legend. The story has it that the logger could stand atop the floating ball and walk it from one end of the lake to the other. I haven’t been able to find a name to go with the legend so take it with a grain of salt.

Logging ceased in the 1930s and the City of Montesano donated the land around Lake Sylvia to the State Parks Commission for conservation in 1936.

Today you can fish from the banks of the lake or use a small craft to fish directly on the lake. Gasoline powered engines are not allowed but apparently, electric motors are fine.

What really had my curiosity peaked was a reference to a Sylvia Creek Falls that was just beyond the dam on the creek which drains the lake. According to what I read it was hidden during the summer due to the leaf cover, and getting below the fall could be tricky as it was slick rock and mud.

Sure enough, I could see just the top of the fall but could find a  vantage point that showed more of the fall. Time to break out the climbing gear I had been assembling for just this kind of scenario. Ever since our canopy climb at Deception Pass I have been purchasing pieces of climbing gear so we could safely go after ‘that shot’.

We went downstream of the falls and repelled down to the streambed. A bit of bushwhacking back towards the fall was needed but once we got a clear shot of the fall it was all so worth the effect.

This has to be one of the most unusual falls I’ve seen in the Pacific Northwest. The water has dug out an impressive bowl in the sandstone resulting in what appears to be two falls. It’s rather hard to explain so I’ll just let the photos to the talking.

Perhaps in the fall or winter, you can see the fall without having to climb down to the stream-bed. Obviously, that option isn’t going to be open to everyone and I wouldn’t recommend trying it without some anchor gear.

It was such a beautiful day that we decided to make it a double. While researching the Lake Sylvia State Park, I had seen where there was a second waterfall in the nearby Capitol  State Forest. This was Porter Creek Falls which has its trailhead near its namesake campsite.

I’ve been curious about the Capital State Forest but had heard mixed reviews. It’s open to motorbikes and ATV’s and I’d heard it attracts more of a ‘Hook and Bullet” sort of crowd. As we parked near the trailhead I could see where people might come up with that analogy. But we had no issues with anyone and the ATV riders that I let pass me at the end of the day were very polite and waved their thanks as they overtook me. I’d have no issues returning or evening staying in the forest.

The hike out to the waterfalls is not overly difficult and can be managed by children. Unlike the earlier access, this was literally a walk in the park. Once we reached on point on the map where the falls were located it became apparent that there were actually two; one on each of the forks of the creek.

Sunny, green, and heavily wooded these falls are picturesque in their own way. Not the highest, widest or most water, but photo worthy just the same and the walk along the creek is worth every step. 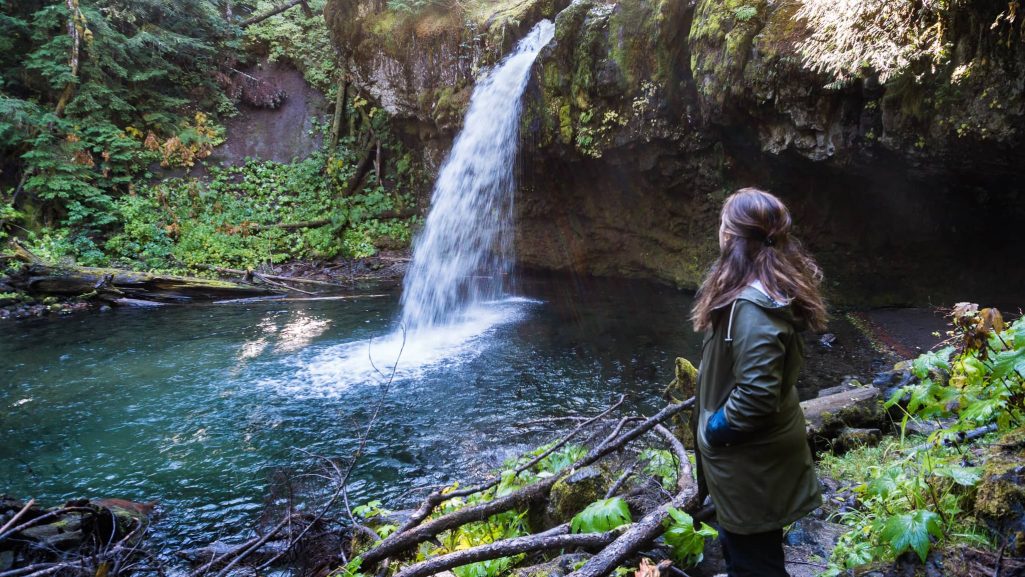 Hamma Hamma Since the Record Fires

Steve meets up with fellow photographer Matt White and they turn their lens toward the Hamma Hamma and see signs of last summer’s record-setting fire season.