The highlight of this weekend’s trip was exploring Frenchman’s Cove but it really starts in Seabeck.  And my first trip to Seabeck was some years ago when I was helping a friend and guide Kiwi with a project he had set up for a local photo instructor.

This was Theresa’s first trip out to this small community and the wildlife did not disappoint. All the usual suspects made an appearance. It was a bit unusual to see 4 Great Blue Heron (Ardea herodias) fishing wingtip to wingtip, or at least I’ve never seen that many in such close proximity. It’s been my experience that they prefer to hunt solo. Hunting Great Blue Herons wade slowly or stand statue-like, stalking fish and other prey in shallow water or open fields.

In contrast to the slow-moving heron was the Purple Martin (Progne subis) with their swift jet-fighter like swoops and dives. Foraging Purple Martins hunt insects higher in the air than other swallows, but in the afternoon and evening, they may feed low and close to nest sites. An interesting fact is that this bird not only gets all its food in flight, but it also gets all its water that way too. It skims the surface of a pond and scoops up the water with its lower bill.

Sitting around camp and consulting the topo maps I came across Guillemot Cove Nature Reserve. The reserve encompasses 184 acres of walking trails and has access to Hood Canal.

Its historic name is Frenchman’s Cove named for the first settler in the area, Henri Querrette who owned a cabin on the northern shore of the cove. It was renamed Guillemot Cove after the Reynolds family purchased the property in 1939. Apparently, Mr. Reynolds was quite the bird enthusiast.

Camping for a few days on Marrowstone Island. It’s a bit chilly, but the beauty of winter camping is having the campground practically to oneself. ...

Toleak Beach is located on the coast of Washington. The sea stacks in the background are part of the Giant's Graveyard. ...

This Great Blue Heron (Ardea herodias) was unusually relaxed during our hike out on the Nisqually Wildlife Refuge boardwalk. We almost tripped over him before noticing him. Never could see what he was so intently looking at. ...

Mt. Rainier as seen from the mouth of the Nisqually Delta. ...

Sunset over the Pacific on Washington's coast. ...

Just published our latest adventure, or maybe misadventure. You can find the link in my bio up top. - "A Regenerating Dip in Coldwater Lake" ...

Here's my latest news article regarding the world of citizen-science | "A Summer of Wild and Scenic Rivers" ...

Lake Crescent after the big wind storm we had last night. We got hammered on the beach, losing our weather station from atop the RV. I was recording gust of nearly 40 before we lost our instrumentation. However, all’s good this morning. ...

Took advantage of the clear skies and set up a day camp on the Washington coast. After a week of forest fire haze, it was a relief to see blue on the horizon. ...

The North Head lighthouse was built in 1989 just north of the Columbia River on the Washington coast. ...

Just published our latest adventure - "A Night at Dusty Lake" - You can find the link in my bio up top. ...

Lewis & Clark had their dog, 'Seaman’ and we have 'Ghost' to round out our team of explorers. Pinto Falls is in the background. A big thanks to Brad for bringing him along. ...

Tower Rock in the Gifford Pinchot National Forest. This monolith soars 2000' above the Cispus Valley floor. ...

Sunrise from basecamp over Tower Rock in the background. Are we sure this is October? ...

When the Reynolds family purchased the Guillemot Cove property, it was run-down. Once open areas were overgrown with alders, and abandoned shacks built by farmers in the 1800’s (who also had cleared the once open areas), were falling into ruins. The Stump House, which legend said a criminal called Dirty Thompson had built to hide out in from the law, was then without a roof. The family spent summers there cleaning up/ the useless shacks were burned down. The previously cleared spots, which were over-grown, were won back with difficulty. The scrubby alders were felled and pigs were used to root out the stumps.

The Stump house is quite the sight to behold, but I couldn’t verify that there was any criminal named Dirty Thompson, but my search was limited to online sources. Could have happened I suppose but I’m inclined to put this story in Urban Legend category. Either way, it’s well worth a visit to this area. 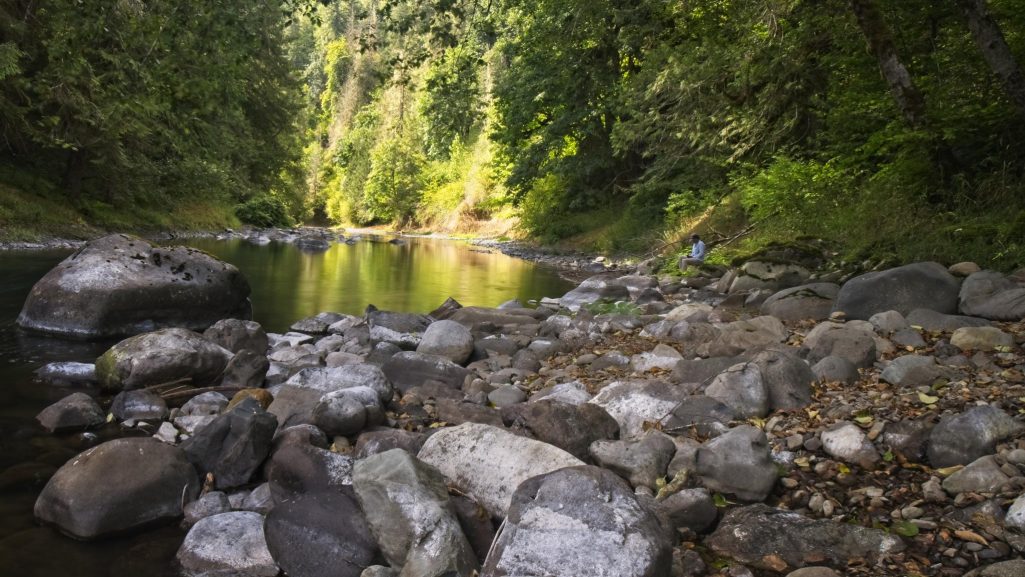 Hit and Run at Bear Canyon

Hamma Hamma Since the Record Fires

Steve meets up with fellow photographer Matt White and they turn their lens toward the Hamma Hamma and see signs of last summer’s record-setting fire season.

You will hardly break a sweat in the easy climb to a captivating 130-foot plunging waterfall. The trail was converted from an old logging road, which accounts for its easy, smooth tread. This trail makes for a wonderful and scenic family outing.