It’s been a while since we visited our historic Fort Flagler State Park. Ironically, the reason is due to the very thing that makes this park one of our favorites; all the activities it has to offer which in turn makes it a very popular destination. With Covid-19 and the surge of new campers heading to the outdoors along with Washington States online reservation system, there just wasn’t a spot to be had over the summer and fall.

With cold temperatures and soggy skies that problem has alleviated but seems not by much. Still, I can’t complain. Hopefully, this increase in campers translates into more people invested in protecting the outdoors. I’d love to see a turn around the dismal track record we’ve experienced in the last four years under the outgoing administration and their seemingly single-minded focus on rolling back hard-fought protections.

Fort Flager is one of three forts that were planned and build to create a ‘triangle of fire’ which protected the entrance to Admiralty Inlet. For years they had been in the planning stage but it wasn’t until the sinking of the USS Maine in February of 1898 that building started in earnest. The other two forts are Fort Worden and Fort Casey but it was Fort Flagler that was completed and activated first.

Activated on July 27th, 1899 the fort boasted state-of-the-art armament with 6-inch, 10-inch, and 12-inch ‘disappearing guns’; so-called because they disappeared behind the walls of their emplacements during reloading which protect both guns and crew. They became obsolete with the arrival of air warfare and long-range naval guns. An interesting note is that some of the larger guns were shipped to the European front during WW1.

The fort continued to be staffed and transitioned to a new role of training grounds. During the Korean War amphibian tactics were taught and practiced on the shorelines of the fort. On June 30th, 1957 the fort was deactivated and 4 years later Washington State started acquiring the fort for use as a state park.

The fort really has quite a bit to offer; historic buildings and a museum, miles of shoreline and trails to hike, as well as a boat launch. In the summer, it’s always busy but we’ve found until recently that the shoulder-seasons are a great time to visit and beat the crowds.

So I'm borrowing that from Shackelton with a bit of tongue in cheek, but the COASST program is looking for Bird Survey volunteers for Washington's wild outer beaches. It's rugged, it can be tough and it can be uncomfortable. But it's always rewarding and stunningly beautiful.

If you feel you have what it takes sign up for a webinar and training here.

A short time-lapse of the clouds scuttling across our bay. #pnwwonderland

Our basecamp on the shores of South Bay for the weekend. Looking across the bay at Westport. If only the weather will cooperate a bit. 🙂

A quick clip of Tower Rock in the Gifford Pinchot National Forest. Took a bit of a hike through the snow to get to this vantage point. #towerrock #giffordpinchotnationalforest #pnwwonderland

If you missed this double back around and feel free to leave a comment. | "Fort Flagler Bears Winter Colors With Grace" https://bit.ly/39b9Ppu

Here's my latest news article regarding the world of citizen-science "Crescent Beach New Base Camp For COASST Surveys" https://buff.ly/2MQZZkC ...

Made our way to Cathedral Falls under a cloud-filled sky with snow underfoot. It was a great hike and the snow gave the Falls an entirely different feel. The ice on the cliff face and at the base of the falls greatly added to the scene.⠀ .⠀ .⠀ .⠀ .⠀ #pnwonderland #pnw #thenwadventure #upperleftusa #pnwdiscovered #cascadiaexplored #pnwparadise #optoutside #wildernessculture #wanderwashington #pacificnorthwest #pnwlife #YourShotPhotographer #keepitwild #pnwphotographer #lifeofadventure #exploretocreate #beautifuldestinations #hikingadventures #wanderlust #thatpnwlife #explorewashington #roamtheplanet #thegreatpnw #photooftheday #washingtonexplored @washingtondiscovered @nextstop24 #nextstop24traveler #WildOlympics #wastateparks ...

Hiked up to the top of Dog Mountain on the west side of Riffe Lake. It’s a steep hike but the view made the effort worthwhile. ...

Our campsite on the shores of Riffe Lake. The lake is man made for a hydro power damn and there is a town at the bottom of the lake which was evacuated for the damn. Apparently at low levels you can we the tops of the structures. ...

Just published our latest adventure, or maybe misadventure. You can find the link in my bio up top. - "Fort Flagler Bears Winter Colors With Grace" ...

Although it was great to be back in Fort Flagler, I’m not sure the campground had the same sentiments towards us. Our first morning there we awoke to a High Wind Advisory. I knew one was being issued before we choose our camp and I had purposely picked a site that was, hopefully, shelter behind a large hill from the predicted SW winds.

All seemed good when we went for our early morning, before-breakfast hike. We were anxious to visit the Upper Campground which is closed during the winter but affords a great view of the bay and Indian Island. As we came out of the lee of the hill we both staggered a couple of steps backward as the wind met us full force. Three hundred yards to the east where the camp was situated all was calm so I congratulated myself on a job well done.

However, later that morning as we were relaxing and planning the day after breakfast, an awful tortured prolonged crack was heard throughout the campground. I couldn’t help but grip the table in anticipation of what would happen next, and sure enough, a tremendous earth-shaking thud followed. We piled out of the trailer and just two sites down a Douglas Fir was laying on its side, its trunk snapped a few feet from the ground. No damage and no injuries so all were fortunate but it was a bit unnerving as we started thinking of ‘what could have been.’

The rest of the weekend was uneventful other than a good bit of filming and exploring. I hope to have a short ready soon. 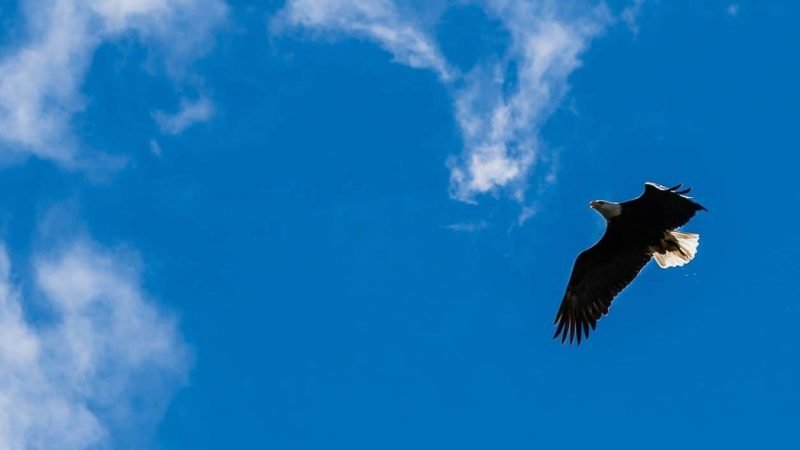 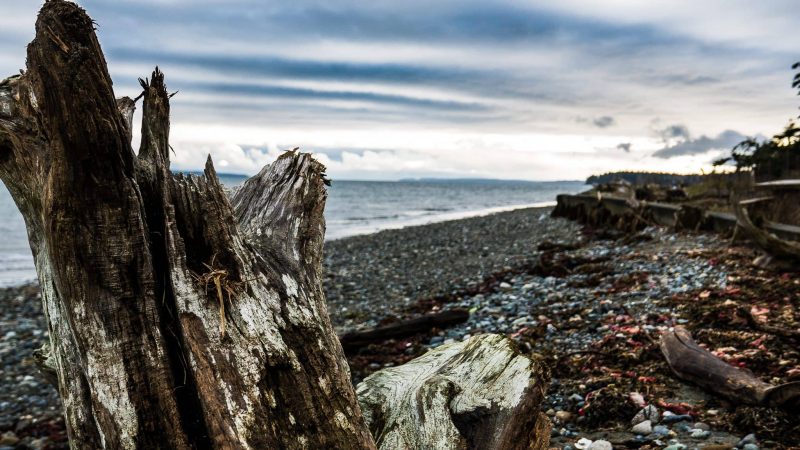 We’ve been spending a lot of time lately on Marrowstone Island. Specifically at Fort Flagler State Park. Before the state purchased the fort for its 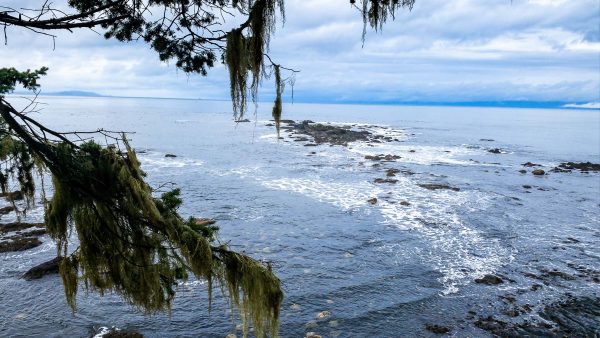 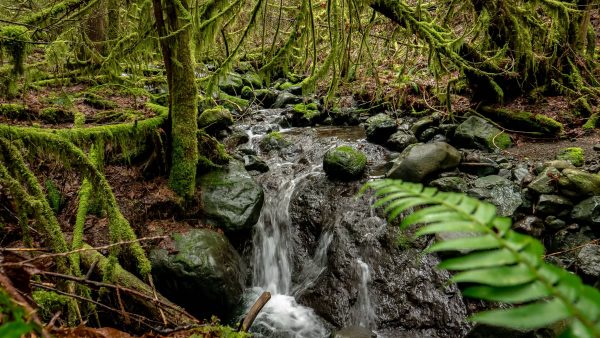 Search For An Unnamed Waterfall

The sign stated that the private tree farm was closed to motor vehicles but opened to foot traffic. So, if we wanted to find our unnamed waterfall that meant hoofing the last 1.5 miles on foot. The thing that worried me was the high voltage wire crackling above the FJ.