“These animals are sentinels,” says Stephanie Norman, a veterinary epidemiologist with Marine-Med who is working to understand the causes and the prevalence of antibiotic-resistant bacteria in the region’s marine mammals—a project supported by a wide range of local and state organizations.

“Studying these animals gives us a nice profile of the health of the Puget Sound area,” she says.

Norman and her team plan to collect and analyze bacteria from a total of 138 Harbor Seals and Harbor Porpoises of different ages to build a more comprehensive picture of the scope of this problem in Puget Sound. This will help scientists better understand the risk that these bacteria pose to marine animals, as well as the humans, living in the area.

Wild animals aren’t routinely taking antibiotics to treat infections, but widespread antibiotic resistance in ocean creatures could still have a major impact on the conservation of endangered species. That’s because, as in the case of an ailing young southern resident killer whale that was administered antibiotics in 2018, veterinarians and others trying to rescue sick animals sometimes use these medications.

“If these are endangered animals, like the orcas that you have in Puget Sound, then it makes sense [to treat them], because saving one animal can actually save that whole population,” says Maria Palamar, a wildlife veterinarian and cofounder of Resolve Conservation, an organization that uses technology and citizen science to address wildlife protection issues. Along with the southern resident killer whales, antibiotics have also been used to treat wild Hawaiian monk Seals and Loggerhead Sea Turtles.

Antibiotic-resistant bacteria in marine environments could be dangerous to humans, too. Marine bacteria can cause skin infections in people with even small scrapes or insect bites, or food poisoning in people who eat contaminated seafood, especially for seafood eaten raw, such as oysters. In certain countries, like Brazil and Australia, oysters have been found to harbor antibiotic-resistant Vibrio parahaemolyticus or Escherichia coli (E. coli), both of which can be fatal to humans.

Scientists have yet to conclusively establish the source of antibiotic-resistant bacteria in Puget Sound, but humans likely play an important role says Linda Rhodes, an environmental microbiologist at the Northwest Fisheries Science Center. Culprits could include failing wastewater treatment or septic systems, runoff, and waste from livestock or even pets, she says.

Antibiotic resistance in marine animals is a problem that should concern everyone, not just conservationists, says Norman. “Animal health, human health, and environmental health are all connected,” she says. “You can’t really look at one without considering the other two. We ultimately are tied to the same water that these animals use.”

And this isn’t the first micro issue found in this region. 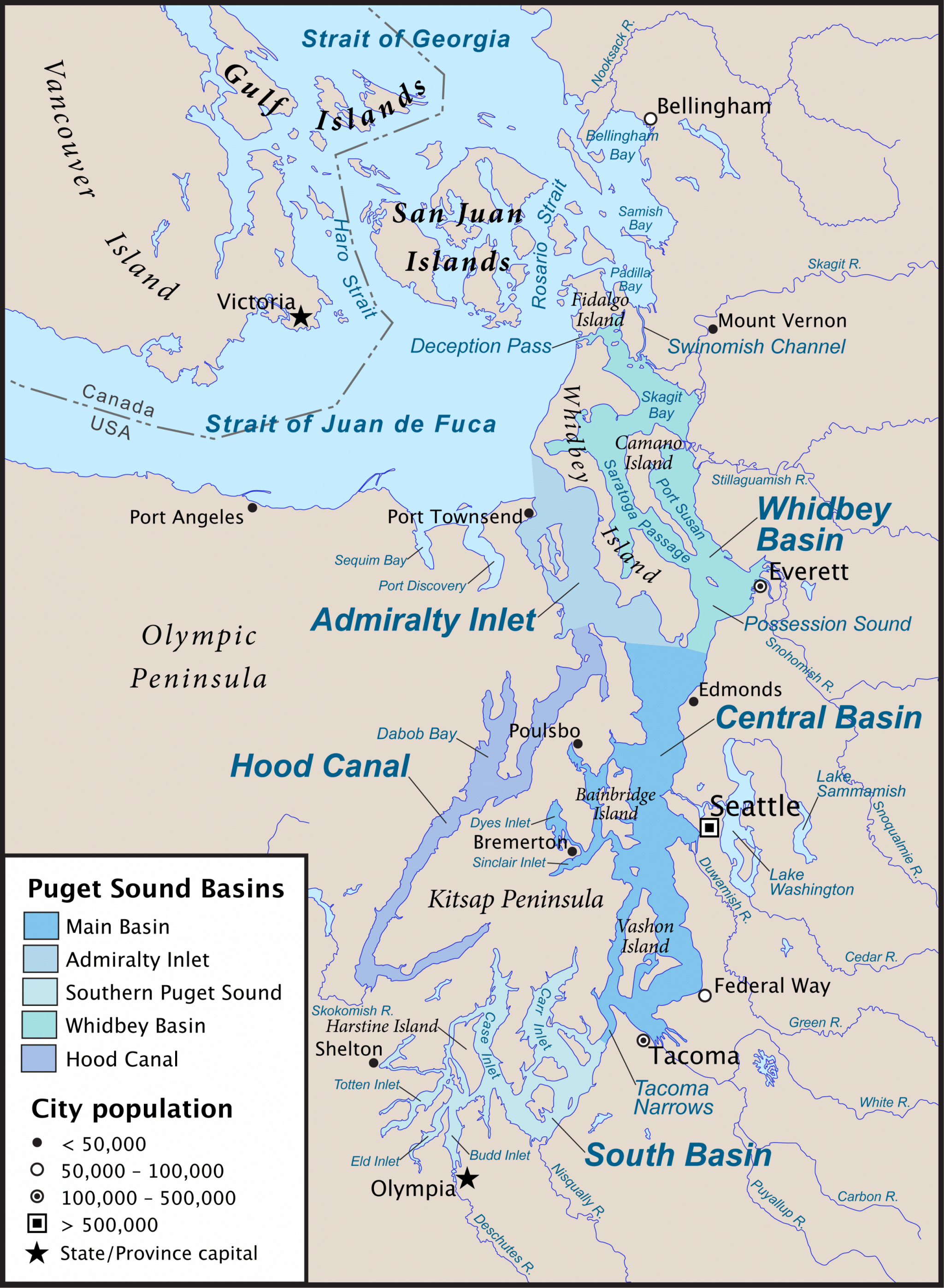 Sunset over James Island on the Washington Coast. Looking forward to getting back out there this month of our #COASST survey. #pacificnorthwest #pnwonderland #conservationinaction #conservation #marineresearch #conservationeducation #olympicnationalpark #WildOlympics

Sunset over James Island on the Washington Coast. Looking forward to getting out there this month for our #COASST survey ...

This fountain is often thought to portray Venus, the Roman goddess of love, or Galatea, a sea nymph from Greek mythology. In 1893 the statue first appeared at the World Columbian Exposition in Chicago's German Pavilion. ...

It’s been awhile but we’re here on Marrowstone Island for a little winter camping. ...

Historic High Rock Lookout with Mt Rainier in the background. It's a bit of a steep hike to get here, but so worth the effort. ...

A shot from above of Iron Creek waterfall located in Gifford Pinchot National Forest. ...

With all the sub-freezing weather and snow we've had lately, I'm missing my Costa Rica and our encounters with White-faced Capuchins in Manuel Antion National Park. They did everything they could to liberate us from our lunch. It was certainly touch-and-go! ...

After four days of below-freezing weather, our local lake is starting to show signs of cold weather. ...

Just published our latest adventure - " WSR Winter Collection" - You can find the link in my bio up top. ...

The Suiattle River during our last Wild and Scenic River fieldwork. The snow made for a beautiful backdrop and it also made for cold hands during the river sampling. ...

On the Suiattle River collecting data for the Wild and Scenic River project. The snow made for a very picturesque scenic but the cold temperatures were a little hard on the hands. 🙂 ...

The sun made a short appearance this weekend just while we were exploring North Cove. This place has the dubious distinction of losing the most coastline in the US. On average 150' per year. They've lost neighborhoods, hotels, cemeteries, and a lighthouse. ...

Just published our latest adventure - " Returning to La Push for Surveys" - You can find the link in my bio up top. ...

A rare clear evening out on Washington's coast. The Olympic National Park has miles of coastline to enjoy. ...

Enjoying a bit of warmth on a cold clear winter's evening on the Olympic Coast. We don't get many days like this in the winter. ...

Setting up camp at Toleak Beach on the Washington coast. We took advantage of the clear but cold winter weather and hiked in the day before our #COASST bird survey. ...

Snug Harbor Cannery on the southern half of Chisik Island. I spent a few years guiding out of the Alaskan treasure. ...

Puget Sound is a sound along the northwestern coast of the U.S. state of Washington, an inlet of the Pacific Ocean, and part of the Salish Sea. It is a complex estuarine system of interconnected marine waterways and basins, with one major and two minor connections to the open Pacific Ocean via the Strait of Juan de Fuca—Admiralty Inlet being the major connection and Deception Pass and Swinomish Channel being the minor.